The Shipbuilding exhibition tells the story of how new scientific theories and hard work went hand-in-hand in the rapid construction of an international centre of innovation at the navy shipyard in Karlskrona.

From our collection: jack

From our collection: jack

Did you know that the Karlskrona Naval Shipyard had a forge for production of jacks? This jack is probably from the end of the 17th century or early 18th century. In 1691 this jack model was pictured on a cooperplate with explanations of shipbuilding.

You experience different environments from historical shipyards and learn more about 18th century engineering. You get to see how they manufactured blocks, tackle and ropes for the many ships built at the shipyard.

We also explain how it was that the Polhem dock at the navy shipyard became known as the eighth wonder of the world when it was inaugurated. 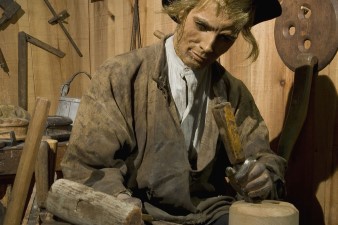